SisMob is the national range of land mobile seismological instruments. It is one of Résif’s specific actions.

The objectives of SisMob are to enable researchers to collect seismological data on targeted targets in the absence of permanent observatories or by providing complementary equipment for these observatories to significantly densify spatial sampling. The duration of the experiments is limited and varies from a few weeks to 2 years with an average duration of a few months. This service has existed since the end of the 1990s.

SisMob’s fields of application cover all the objectives of observational seismology, from the study of the internal structure of the Earth to the study of seismic, volcanic or ground motion hazards. As an example, SisMob provided the stations for the French component of the European community project AlpArray. SisMob is also involved in post-earthquake initiatives such as its work on the Teil earthquake of November 11th 2019 for which SisMob provided 30 seismological stations that allowed enhanced and more in-depth understanding of the spatial distribution and characteristics of aftershocks.

The SisMob park, located in Osug/ISTerre (Grenoble), has 250 seismological stations, including 150 classic broadband or medium-band stations and 100 autonomous short-period nodes (figures for June 2019). 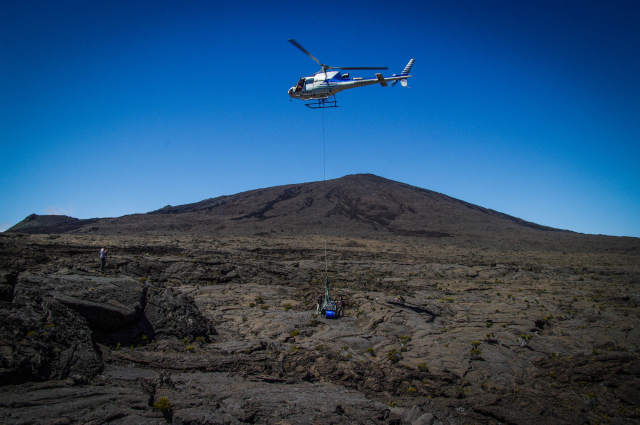 Deployment of a medium band seismic station Sismob on the volcano of Piton de la Fournaise in Reunion Island © Guillaume Levieux, IPGP. To read more about it