The Permanent accelerometric network (Rap) is one of Résif’s specific actions.

The French Permanent Accelerometric Network (Résif-Rap) aims to improve knowledge of significant movements of the ground and buildings on French territory which could be caused by earthquakes. Since 1997, the Résif-Rap has been acquiring, disseminating and promoting accelerometric data from earthquakes recorded in France, with the help of regional networks that maintain accelerometric field stations (160 stations in 2022).

… in mainland France or the overseas territories

Accelerometric surveillance is carried out in France and overseas. The Résif-Rap has set up its stations in regions of relatively high seismicity where the risk is highest (Antilles, Alps, Provence and Pyrenees) and also in regions where seismicity rates are lower but not negligible (Rhine Graben, Ardennes, Armorican Massif, Mayotte). One of the challenges for researchers to install the stations as close as possible to the seismic sources to record strong movement at short distances (ideally less than 20 km). How the network is deployed and evolves is therefore strongly affected by progress in the knowledge of seismicity and potentially active faults in France. Résif-Rap also aims to install its stations in seismic risk: sites where seismic wave amplification phenomena are expected and urban areas with high human, economic or environmental issues.

Résif-Rap supports the use and enhancement of its accelerometric database, and more generally works on recording ground and building movement caused by earthquake activity in France. Since it was set up, Résif-Rap has promoted synergies between the different actors involved in seismic hazard and risk analysis. The network leads several working groups every year to discuss both its own evolution and valorization initiatives in relation with regulations to reduce seismic risks on French territory. Every two years, the ‘Biennale du Rap’ brings together the actors (engineers and researchers) of the Résif-Rap for a technical and scientific symposium lasting a few days . In the year between two such events, with the support of the Ministry of Ecological Transition, the Résif-Rap launches a call for scientific, research and development projects which support new projects that promote collaboration initiatives between the Résif-Rap’s partners and produce results in line with the network’s scientific objectives.

The central site of the Résif-Rap is based at Osug/ISTerre (Grenoble) as is the Résif data centre. The central site collects the accelerometric data acquired by all the stations in the network, updates and maintains the database, improves quality control, provides technical support to the regional networks and ensures that the stations are continually at the cutting edge of technology. It defines the new technologies and equipment to be rolled out throughout the network.

In 2021, the RAP deployed on the metropolitan territory 160 permanent Resif stations, completed by 17 associated stations. All these stations have collected 2.88 TB of data for a total volume of 28 TB of data made available to the scientific community. 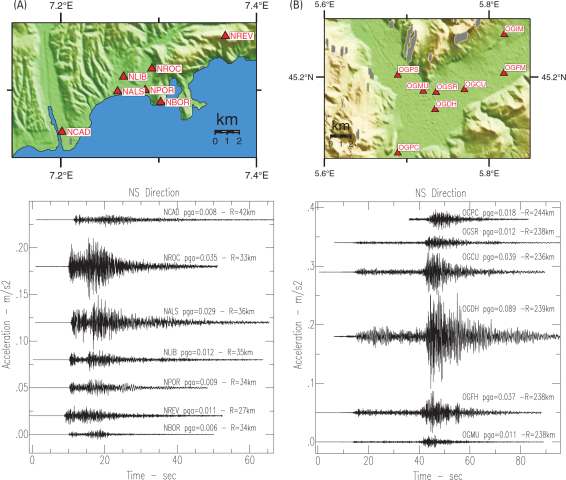