Warning: the Résif dataset is free and available in open access but please note that use of this data should include citations. For more information, see the “Data distribution policy” section.

The Resif Information System Transversal Action coordinates and operates all the processes related to seismological data. It is one of the three transversal actions of Résif.

Résif seismological data are collected and validated by six centres run by Résif partners which are called “A Nodes”. These centres also produce the metadata required for the ongoing use of seismological signals. The data and metadata are then transmitted to the Résif seismological data centre, ‘B Node’ is in charge of their archiving and distribution, including at the European level via the Epos infrastructure. The Résif data services are developed, distributed and maintained by ISTerre’s (Osug).

The Résif Seismological Data Centre is one of 19 global centres distributing data and metadata in formats and using protocols which comply with International Federation of Digital Seismograph Networks (FDSN) standards. It is also one of the eleven nodes which make up Eida, the European virtual data centre.

A few figures
The data center provides access to waveforms from 399 permanent stations and 2843 temporary measurement points (corresponding to 243 mobile stations). In 2020, it distributed 73.5 Terabytes of data in response to more than 37.5 million requests submitted by 2250 unique visitors (February 2021 figures).

548 permanent stations and 50 mobile stations collect data in the framework of the specific Résif-GNSS and Résif-GPSmob actions. The Résif GNSS data centers distribute more than 8 Terabytes of data each year in response to nearly 136,000 requests (February 2021 figures).

This centre is managed and maintained by the Geoazur laboratory within the Observatoire de la Côte d’Azur. The data centre collects, disseminates and archives data from active stations in the permanent network  which are run by 13 research groups. These operational centres send the raw data recorded on an ftp server to the data centre. For the majority of stations, this is carried out on a daily basis. The raw data are automatically converted into a single standard format and undergo quality control. They are immediately archived and disseminated on a public ftp directory.

In recent years, the information system has evolved. The database architecture has been modernized. Today, scientific users have a web portal allowing them to explore a wide variety of information associated with the stations and observation data files. As part of the construction of the Epos infrastructure, the system has been redesigned and expanded. The Glass webservices have been operational since 2021 (https://gnssdata-epos.oca.eu/#/site).

Since 2011, the permanent National GNSS Network Rénag also archives and distributes with restricted access the data of the Orpheon network of the private partner Geodata Diffusion. Data from the Geodata/Orpheon network are conditionally accessible for scientific applications.

The oldest station in the permanent Renag network was installed in 1997. Since 2017, a majority of stations (85%) ensure a data availability above 90%. In 2020, more than half of the Rénag stations receive signals from the European Galileo system and the majority of the stations (about 70%) acquire data with an interval of 1s. The annual volume of observation data is thus growing strongly due to the modernization of the network, the high frequency acquisition and the arrival of new GNSS observables. The Renag data center collects about 124 GB of data per year for a total distributed volume of 3.25 TB (February 2021 figures).
The archiving and transformation to RINEX format of data from the Centipede collaborative RTK positioning network is being tested.

It is managed by the Institut National de l’Information Géographique et Forestière (IGN). The IGN installs its own GNSS stations but also signs agreements with all interested partners to integrate the RGP.

Data from the RGP GNSS stations arrive every hour on the IGN servers, where they are checked, formatted and made available to users under an Open License. On a regular basis, GNSS calculations are performed on all stations, at an hourly rate over the last 6 hours of observation on a daily and weekly basis. The results of these calculations allow in particular the monitoring of the geometric stability of the stations and are also available on the dissemination server.

The main RGP data center hosted by the IGN is relayed by a mirror data center located at the ENSG. 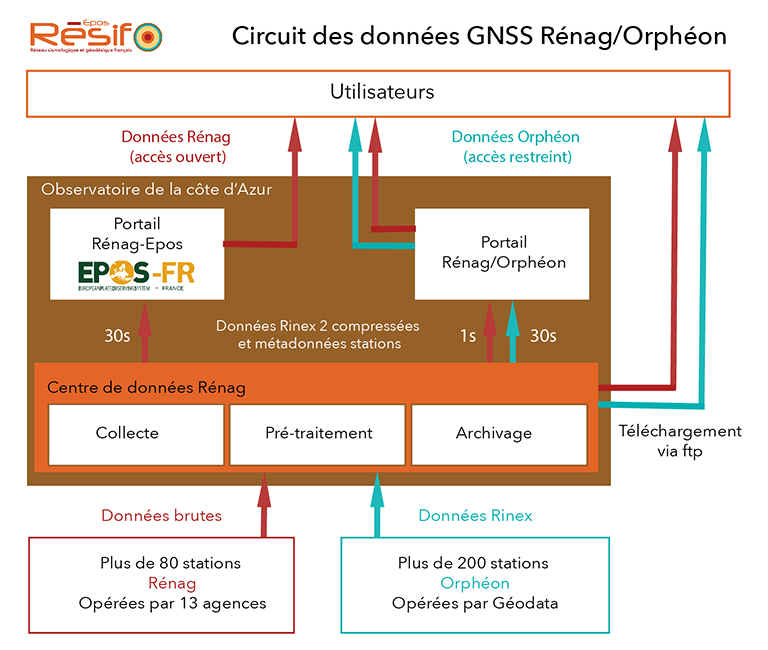 For TD data, the mission center interfaces with GNSS stations by retrieving raw files (typically every 15 minutes, every hour or once a day) and transforming them into RINEX consumable files. It makes the consumable data available according to validation criteria derived from quality files. More details are available on the Regina project website.

TR data are processed by the Casters. This equipment is used to receive TR data from REGINA GNSS stations and from different entities for redissemination to customers. The Caster uses the NTRIP protocol (Networked Transport of RTCM via Internet Protocol) based on the http protocol for the provision of GNSS data via the Internet. Details on Regina project website.

In addition, Eost is also responsible for the elaboration of level 2 data (pre-processed data to allow tidal analyses) and level 3 data (residues after geophysical corrections). These level 2 and level 3 data are also distributed by Igets.

Resif’s Mobile Gravity Network (GMob) consists of relative field gravimeters and absolute gravimeters. These instruments collect point gravimetric data during research missions conducted in France and abroad by French teams.
The data collected are transmitted to the Bureau Gravimétrique International (BGI), a scientific department of the IAG which ensures the compilation, validation, archiving and availability to the scientific community of all relative or absolute measurements of the Earth’s gravity field (terrestrial, marine, airborne measurements).

Other instruments (relative field gravimeters, superconducting gravimeters or absolute gravimeters), operated by different national agencies, also contribute to the acquisition of gravimetric data on the national territory or in other regions of the world.

Four superconducting gravimeters are the permanent equipment of the Résif Gravity Network. There are six relative field gravimeters and four absolute gravimeters in the mobile park. 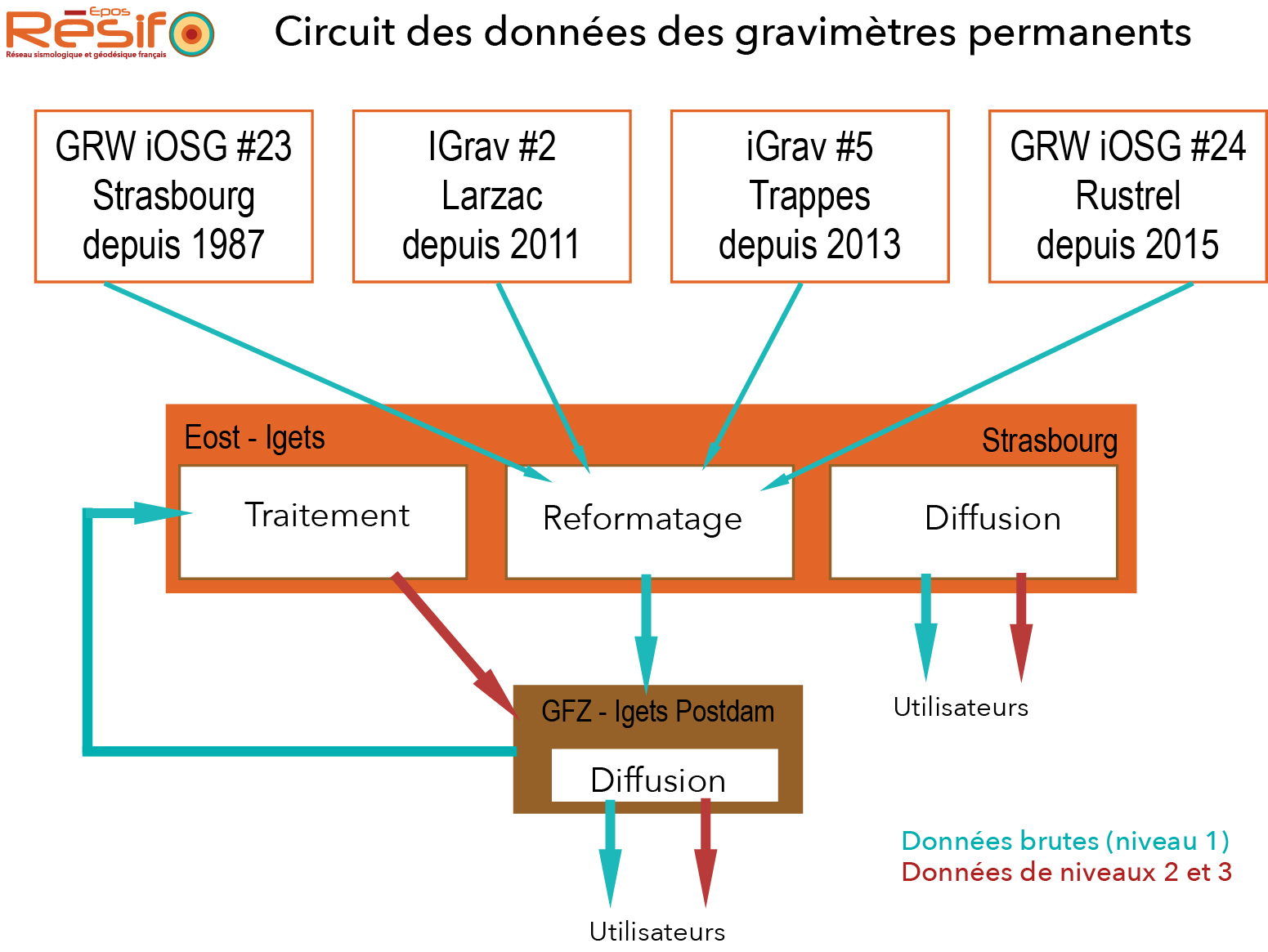