The first prototype was initiated during the interreg RISE project, and is the result of a collaboration with the IPGP (S. Bonaimé). The fourth version of the prototype is currently being tested.
Within the framework of RISE, the prototype developed had allowed a performance gain of up to 20dB on the noise levels recorded by the sensors.

Compared to the previous version, one of the main changes concerns the total weight of the device, which goes from 85 Kg to about 30 Kg despite a heavier sensor coupling material (granite has been replaced by INVAR, a non-magnetic and stainless metal with the same performance, regarding thermal expansions, as glass).

One of the practical aspects of the Tank is that it is equipped with notches for the sensor feet, which allows, once the Tank is correctly oriented to the north, and levelled using adjustable feet, to have a pre-positioning of all sensor models to the north as well. The new version is compatible with a greater number of sensor models.

The first versions of the Tank, apart from their complicated installation in difficult to access environments (or long manual carrying) lacked watertightness. The internal pressure reached the value of the external pressure in a few hours. This temporary smoothing of barometric fluctuations, however, made it possible to improve the signals by filtering out the noise generated.

The objectives of the new development are to facilitate the implementation (weight saving), to improve the cable passage system, and finally to improve the barometric sealing of the system to increase the smoothing time and improve the performance of the sensor installed indoors.

The tests carried out on this prototype Tank V4 prototype

Here are several graphs representing inside & outside pressure curves during tests performed on the new prototype.

The tests used 4 sensors, 2 for absolute pressure and 2 for temperature & humidity. A couple of each is inside and outside the device.
A cable was passed through the cable gland to simulate the presence of a sensor.
On the first graph below, we see superimposed the curves of temperature and internal and external pressures, over the duration of the whole test.
The recording was made from 21/06 to 02/07. 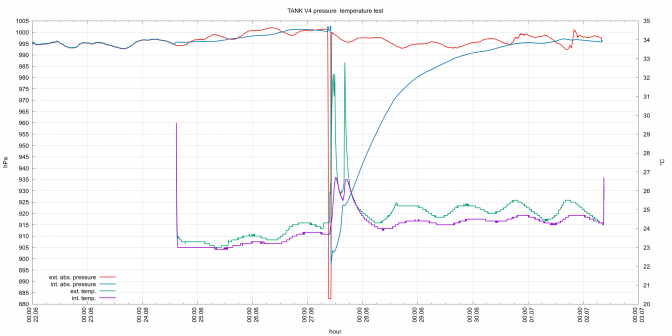 Conduct of the first test

Recording begins on 21/06 at approximately 12 noon.
Locking (waterproof) of the box on 24/06 at 13h45.
The device was mounted at Saint Eynard (summit very close to Grenoble, at about 1300 m altitude) on June 27th.
After 1h, the device is unlocked, letting the pressure differential (audible).
The device is lowered back down to Grenoble (200 m) and stored on the 27th from 10:30 am until the end. 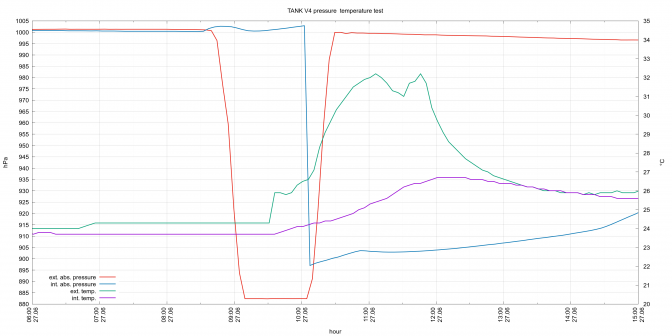 It can be seen that the Tank remained airtight during the climb in altitude, and that the temperature rise (probably solar radiation) was reduced by the insulation. We also see that the pressure was filtered for several days before reaching the external pressure.

A second, simpler test session was conducted between July 11 and August 2.

The device was left as is for several days before being sealed and observed. The day of the locking operation (17/07) is a good indication of when the two pressures dissociated. 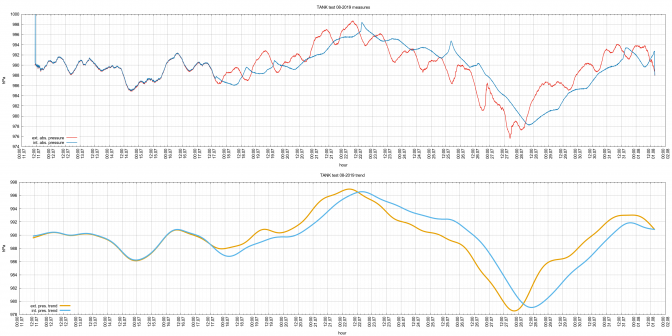 The internal pressure is well smoothed, but not as good as on the first test session.
The second graph shows a smoothed trend of the daily variations. It can be seen that the two curves are about 12 hours out of phase with each other.

Having noted the sealing problem, our suspicions are focused on the cable gland (Roxtec brand), the only element that remained identical between the old and new versions of the Tank. This cable gland is guaranteed watertight to IP68 but its airtightness is not specified (only provided by the retailer).
A random leak in this part would explain the lack of tightness of the device over time.
We will therefore install a system already tested on an old version of the Tank (also prototype) in order to discriminate this leak.

If the leak tests are conclusive, we will carry out a primary vacuum (100 mBar absolute) in order to observe the leak behaviour and the temperature insulation created by the depletion of the inner atmosphere.

Presentation of the Tank