Planetology invites itself to the G2 2019 conference

A more complete version of this article appeared in web and print versions in the Newsletter Résif n°17 of January 2020.

The G2 Group’s 2019 annual conference “Geodesy – Geophysics” was held at the École Supérieure d’Ingénieurs Géomètres et Topographes in Le Mans from 20 to 22 November 2019. This 2019 edition hosted a session particularly appreciated by the delegates, devoted to the applications of geodesy and geophysics for the study of other planets and small bodies of the Solar System. Although the etymology of the terms “geodesy” (dividing, sharing the Earth) and “geophysics” (physics of the Earth) refer to the sole study of our planet Earth, the planetary applications of the latter currently constitute an essential panel of investigative tools in the service of comparative planetology.

As Pascal Rosenblatt from the Nantes Laboratory of Planetology and Geodynamics (UMR CNRS 6112) explains, spatial geodesy is the most widely used method of investigation for the internal structure of the telluric planets of the Solar System and its small bodies, alongside Joëlle Nicolas from the “Geomatics and Land” Laboratory (EA Cnam 4630). This method uses artificial satellites, orbiting around the planets, whose trajectory is meticulously followed thanks to the measurement of the Doppler shift of the frequency of a radio frequency link between these satellites and the Earth. The orbit of NASA’s Martian satellites has been rendered with an uncertainty of 2 m from these Doppler tracking measurements (notably processed using the GINS software “Géodésie par Intégrations Numériques Simultanées” from CNES). The Martian gravity field was restituted with a resolution of 110 km, as well as its seasonal variations and the tidal potential via Love numbers. If the orbiting satellite also carries a laser altimeter, as in the case of the Moon with LRO, it becomes possible to determine surface deformations due to tides.

The radio-frequency link technique can also be applied to restore the gravity field by measuring variations in the distance between two orbiting satellites. This principle, already implemented on the GRACE missions for the Earth, has been applied to the Moon with the GRAIL mission resulting in a spatial resolution of 25 km. Building on recent advances in “CubeSat” nano-satellite technology, IMCCE’s BIRDY mission is studying the radio-frequency link technique for studying the internal structure of small bodies in the Solar System. The disturbance measured in this case is that of the trajectory of the nano-satellite during its flight over the object.

When the planet has landers on its surface, such as Mars with the recent InSight (Nasa, 2018) and ExoMars (ESA/RosCosmos, 2020) missions, radio-science technology makes it possible to measure its own motion (variations in its rotational speed and the orientation of its axis of rotation due to precession, nutations and librations). The InSight and ExoMars missions have been equipped with the radio-frequency transponders RISE (“Rotation and Interior Structure Experiment”) and LaRa (“Lander Radioscience”) for this purpose. Exemplary in terms of instrumentation, InSight also carries the highly sensitive SEIS seismometer, which is used as a gravimeter to study the tide induced by Phobos in situ.

The exploitation for geophysics of the products of geodesy is based on the joint analysis of gravity field models and Love numbers. It leads to estimates of the size and physical state of the core, the viscosity of the mantle, the thickness of the crust and the lithosphere, and mass transfers in the atmosphere which are very useful in answering questions about the formation and evolution of planets and their atmospheres. The dynamism of space geodesy is supported by the increasing number of missions programmed in space agencies around the world and the variety of objects under study (see figure). There is no doubt that decisive advances in the understanding of our Solar System will come from this exciting science. 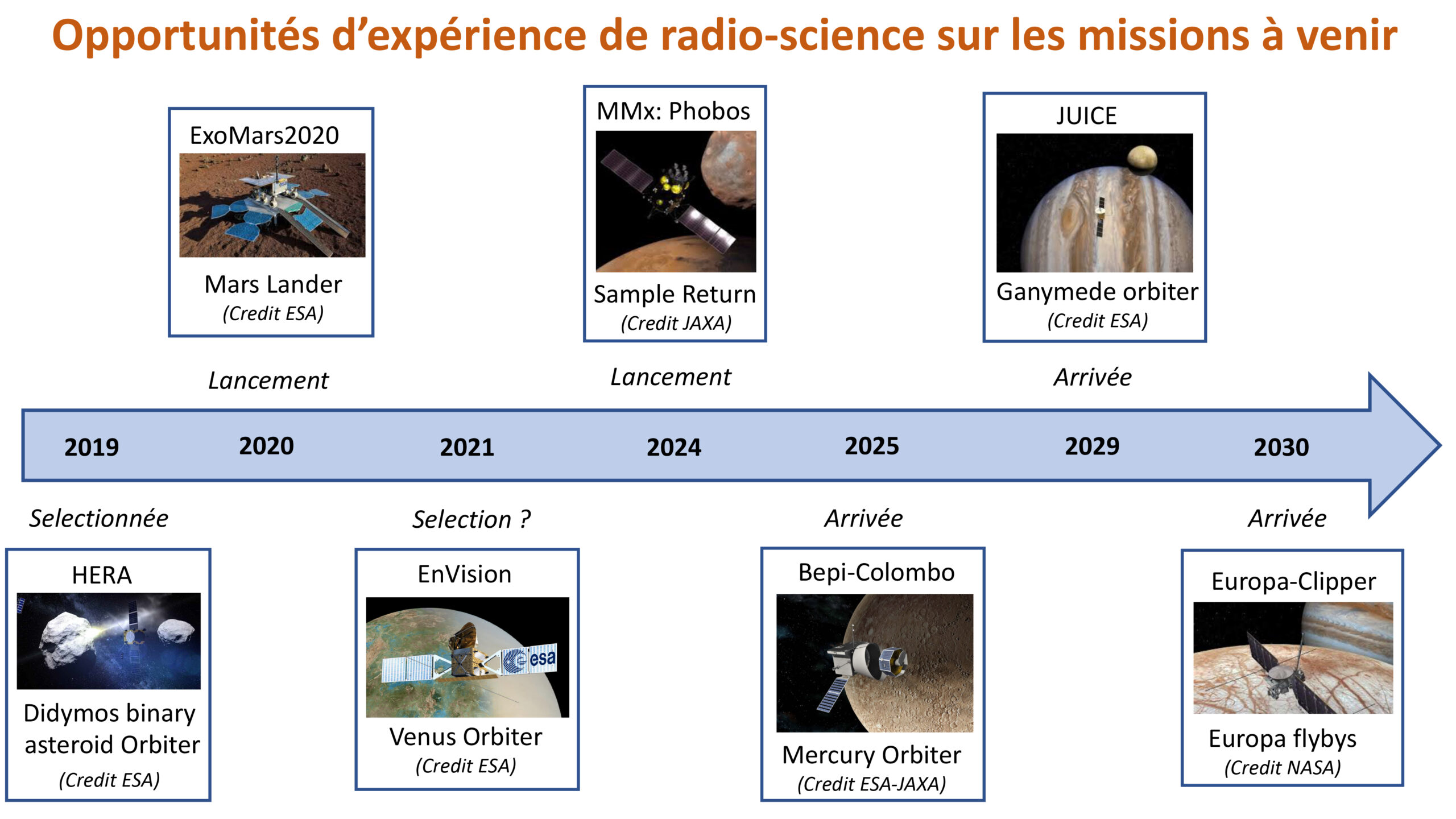