First map of deformation rates on the scale of Metropolitan France

A more complete version of this article appeared in web and print versions in the Newsletter Résif n°17 of January 2020. (in French)

Everybody has in mind the image of the 2011 earthquake in Japan, leading to the nuclear accident in Fukushima. This event perfectly illustrates the link between natural risk management and socio-economic issues in industrialized countries. France is the 2nd country in the world with the most nuclear reactors. However, the geodynamic context is very different from that of Japan because the latter is located near a very active plate boundary. On a global level, about 90% of seismic energy is released at plate boundaries (Scholz, 2002). France, on the other hand, is considered an intra-plate domain belonging to the large Eurasian plate that is considered stable. Strong earthquakes (Magnitude > 6) are very rare but not non-existent (Jomard et al., 2017). There is, however, weak to moderate seismicity present throughout the territory.

The study of the current geodynamics of France is therefore an important scientific and socio-economic issue. In order to study and quantify deformation, the analysis of time series of positions obtained from GNSS data has proved its worth in areas of rapid deformation, but remains at the limit of resolution in areas of slow deformation. This resolution limit, equivalent to the noise level in the measurements, is related to the dispersion of the estimated daily positions. The noise is due, among other things, to satellite orbits, weather and station-specific characteristics. Thus, the main problem is to be able to discriminate the distortion signal from the intrinsic noise of the method.

The current deformation in the Alps and Pyrenees could be partially identified in previous studies (Rigo et al., 2015, Nocquet et al., 2016, Walpersdorf et al. 2018), but for the rest of the territory, the density and operating times of GNSS stations remained too low. Precise quantification of deformation rates in France is the main objective of the national observation service Résif-RENAG (REseau NAtional GNSS). Christine Masson’s thesis work in Montpellier was part of this theme and therefore consisted in setting up methodologies to be able to quantify deformation in a robust and statistical way for the whole metropolitan territory. This work was made possible by the maturity of the permanent GNSS station network, first developed by the scientific community over the last 20 years (Résif-RENAG) and by the IGN (RGP network), and then enriched by commercial networks (e.g. Orpheon, Teria or SatInfo).The quantification of the resolution of each of the stations was achieved through the use of synthetic data. The advantage of synthetic data, unlike real data, is that the actual speed of the sites is known and thus the deviation between the estimate and the true speed can be estimated. This amounts to quantifying the precision limit of our analysis according to the characteristics of each time series (for more details, Masson et al., 2019a). The results showed that, for stations more than 8 years old, the velocity accuracy reaches 0.2 mm/a for the horizontal components. But, to go further, Christine Masson sought to verify whether spatial coherence exists in the velocity field obtained. To ensure robust results, she used two independent methodologies whose performances were statistically quantified and which provide close results. This thesis work provided the first deformation rate map for the entire French metropolitan territory (Fig. 2) and quantified the confidence in the obtained deformation rates (more details, Masson et al., 2019b).

At present, this work does not provide direct answers to industrial safety questions, but it has unblocked certain scientific locks related to the resolution of geodetic methods. It is now important to go further and use these results to constrain seismic hazard calculations. For example, in 2019 work was carried out in partnership with the Institut de Radioprotection et de Sûreté Nucléaire (IRSN) to integrate GNSS data into seismicity models. 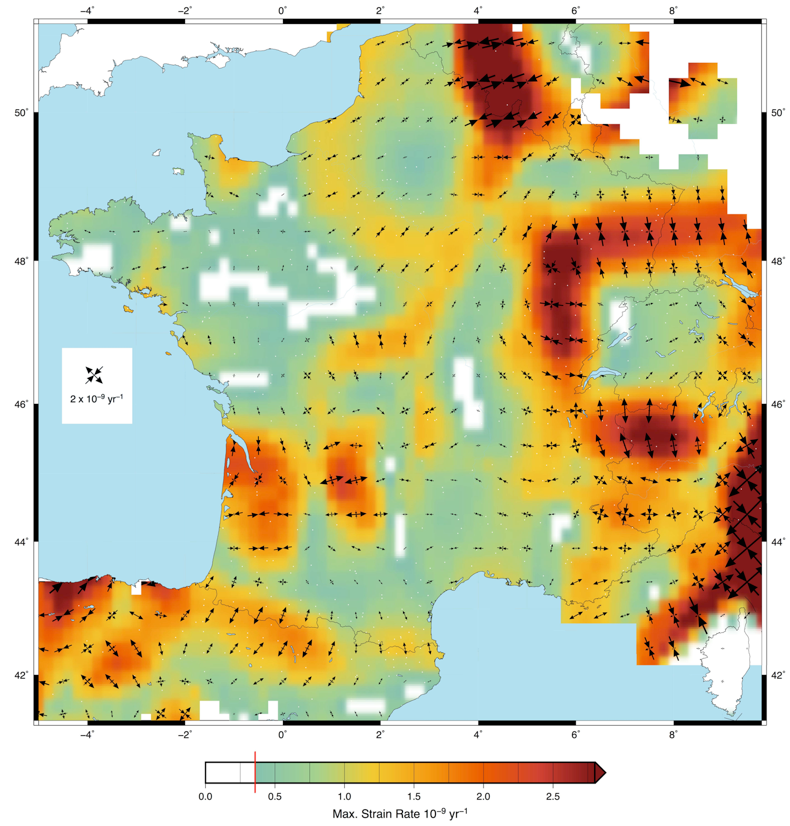