Effect of confinement on seismic noise in mainland France

During this period of confinement we could have the impression that the Earth has stopped turning… yet it continues to shake !

The Résif Research Infrastructure brings together various networks for observing the movements of the Earth’s crust in France. Among them, the Permanent Broadband Network (RLBP) consists today of ~150 seismological stations measuring continuously and with great sensitivity the ground vibrations over the whole metropolitan territory. These vibrations are caused by seismic activity, but also by a whole range of natural or anthropogenic phenomena which, like light pollution in astronomy, generate a “seismic background noise” that limits our ability to detect small earthquakes. For frequencies above ~1Hz, a significant part of this seismic noise is generated by human activity in the environment of the measurement sites (industries, road and rail traffic, etc.). Even if a significant effort has been made to install the great majority of the RLBP-Ressif stations as far as possible from these sources of “seismic pollution”, their effect remains visible and is reflected in particular by a day/night and week/weekend variability of the noise level.

We have analysed the evolution of this seismic noise since the beginning of March (Figures 1 and 2) at more than a hundred stations where this anthropogenic signature is usually observed. The implementation of the confinement on March 17 results in a median decrease of about 25% of the amplitude of this seismic background noise induced by the decrease of human activities generating vibrations. The decrease is even more important for the few stations located in cities. For example, the Résif-RLBP station recently installed in the basement of the Curie Pavilion of the Institut de Physique du Globe de Paris (5th arrondissement / station code = FR.CURIE) recorded a ~35% decrease in the mean amplitude of ground motion in the 4-14Hz band (Figure 3). The seismic noise during weekdays (Monday to Friday) in Paris is now even slightly lower than that typically observed during weekends before the confinement. A further slight decrease can be observed at night from 26 March, when public transport was reduced in Paris.

This decrease in the seismic background noise level may improve our ability to detect small earthquakes. Figure 4A shows the number of earthquakes detected and located on the metropolitan territory by the BCSF-RéNaSS (involved in the transversal action “Seismicity” of Résif) during the month of March. Even if the seismicity rate presents an intrinsic variability, a slight increase in the number of small magnitude earthquakes (M<1) seems to be emerging since the beginning of the confinement. Much more clearly, the number of quarry blasts (Figure 4B), which also generate seismic waves recorded by our observation networks, has drastically decreased.

The effect of confinement on the seismic noise level is also observed on the recordings of many other seismological stations worldwide. At the initiative of Thomas Lecocq (Royal Observatory of Belgium) an international group has been set up to carry out a complete analysis of this phenomenon. Claudio Satriano (IPGP) and Jérôme Vergne (Eost-IPGS) are taking part in it. 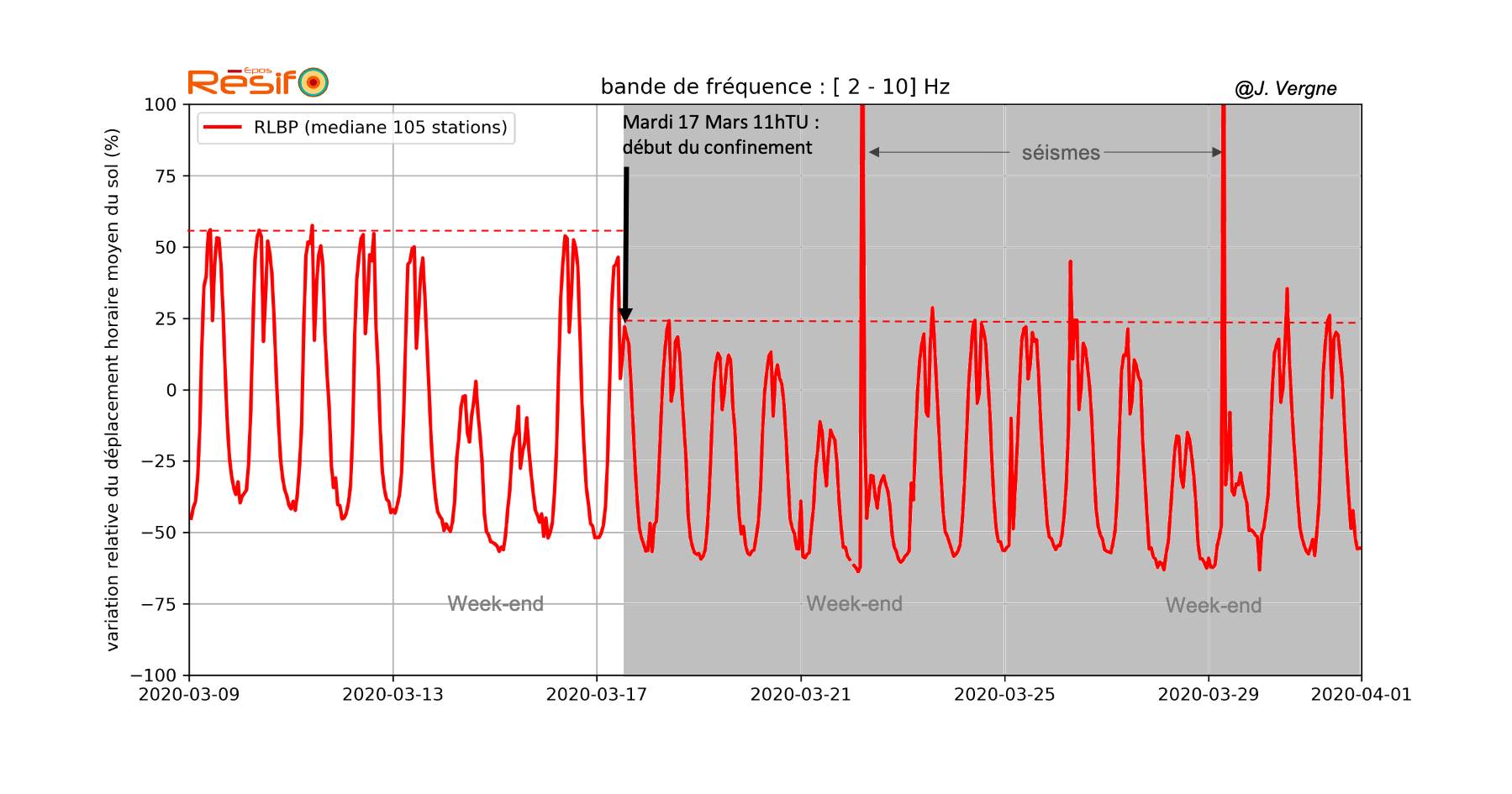 Figure 1: Variation of the ambient seismic noise level in France following the confinement represented by the median of the relative variations of the amplitude of ground displacement (hourly mean) in the 2-10Hz frequency band for 105 Résif-RLBP seismological stations (see Figure 2) © Jérôme Vergne, Eost-IPGS (Strasbourg). To know more about it. 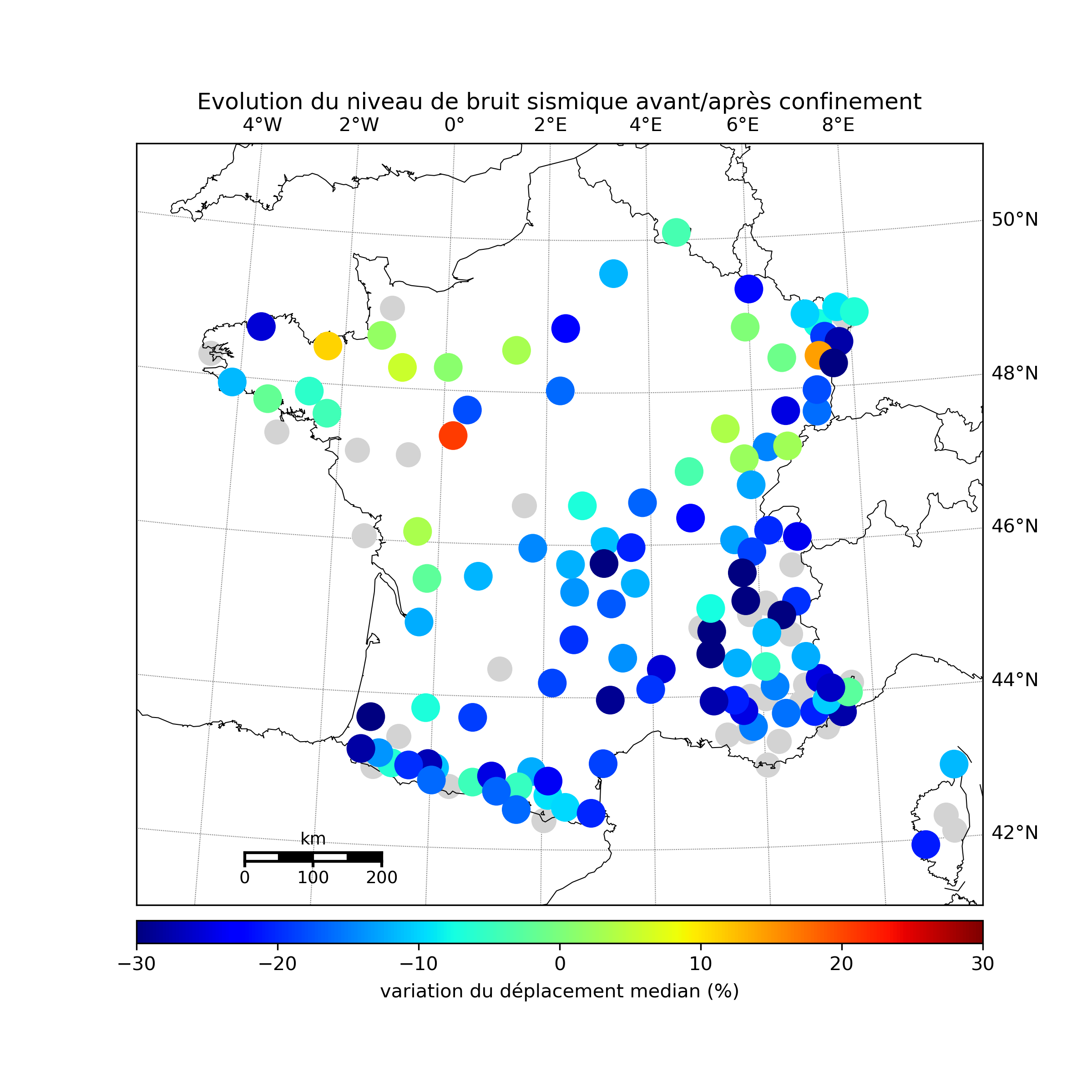 Figure 2: Map of permanent seismological stations in metropolitan France (FR network only) showing for each station the evolution of the ambient seismic noise level in the 2-10Hz band between 09-17 March and 17-31 March 2020. The stations in grey did not have sufficient data over these periods or do not show a clear anthropogenic signature in the frequency band studied © Jérôme Vergne, Eost-IPGS (Strasbourg). To know more about it. 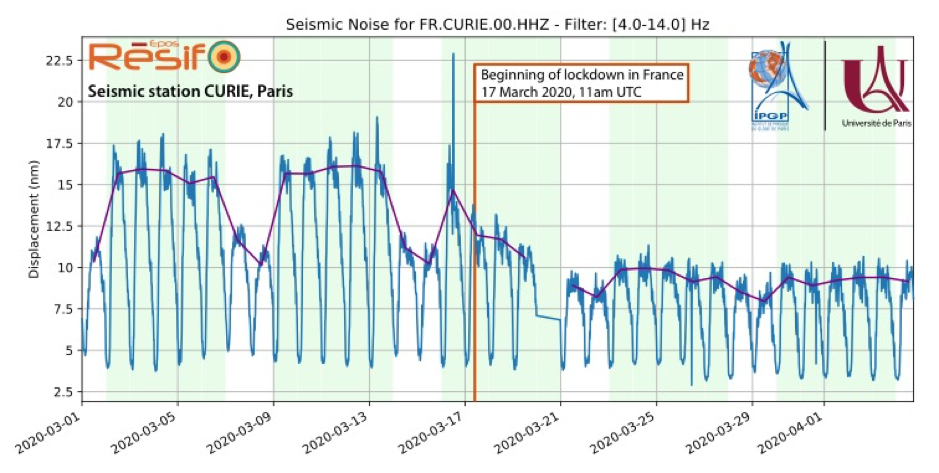 Figure 3: Variation of the mean ground displacement (in nanometres) observed on the vertical component of the recently installed Résif-RLBP FR.CURIE station at the IPGP premises. Graph produced using the SeismoRMS tool. © Claudio Satriano, IPGP (Paris). To know more about it. 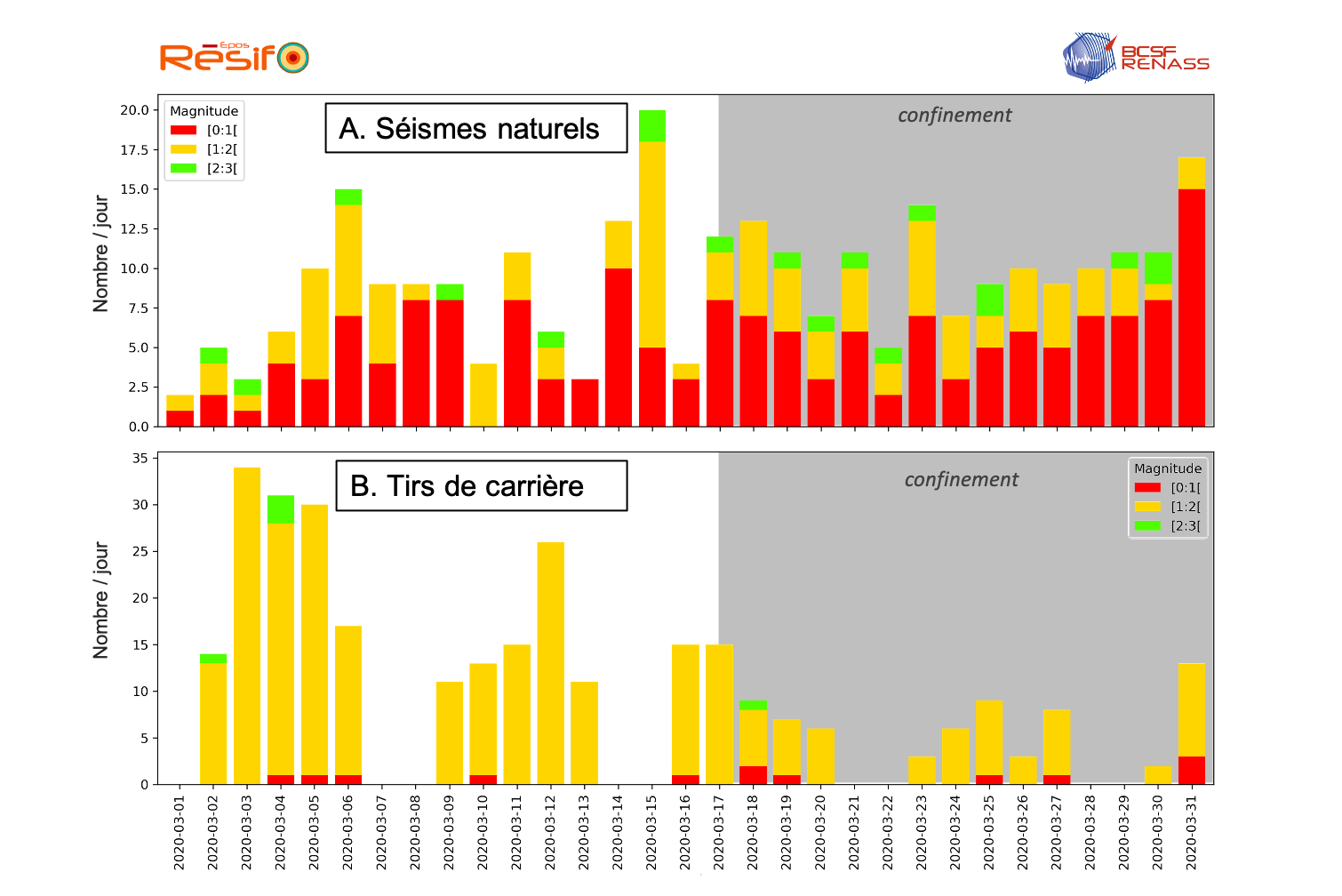 Figure 4: Evolution of the number of seismic events of the earthquake (A) and quarry blast (B) type located by the BCSF-Rénass for the month of March 2020 in the zone 41°N – 52°N / 5°W – 9°E (Extended Metropolis) © Jérôme Vergne, Eost-IPGS (Strasbourg). To know more about it.