The year 2020 is a year of transformation for the Résif’s web ecosystem. In addition to the present website that went online on June 9th, the developments concern several satellite sites and portals.

Within Résif, a new version of the Résif seismological data access portal is being developed. This portal is intended for seismologists and more generally for anyone wishing to access the data. It allows to visually explore the networks and stations whose data are distributed by Résif. It also offers various web services to access (meta)data. A merger of the websites franceseisme.fr and renass.fr is also underway as part of Résif’s Transversal Seismicity Action. In particular, the new web site will disseminate the products resulting from the Résif data and focused on the knowledge of French seismicity and the associated hazard.

Around Résif, an Epos-France website and the database of potentially active vulnerabilities in metropolitan France (IRSN) were first created. The SisFrance database (IRSN, BRGM, EDF) is back online after several years of interruption.

opens simultaneously with the new Résif website on June 9th. Currently, the site exists only in French but an English version will be launched later this year.

EPOS, European Plate Observing System, is a research infrastructure in charge of data integration in Earth Sciences, based on pre-existing services in Europe. The aim of EPOS is to enable the development of innovative multidisciplinary research for a better understanding of the physical and chemical processes of the solid Earth.

EPOS-France deliberately places itself in a context of open access to research data. A large part of the site offers access to the data and services offered by EPOS, and by French actors in the field. The site and the data are mainly intended for research professionals, but are also open to the general public. 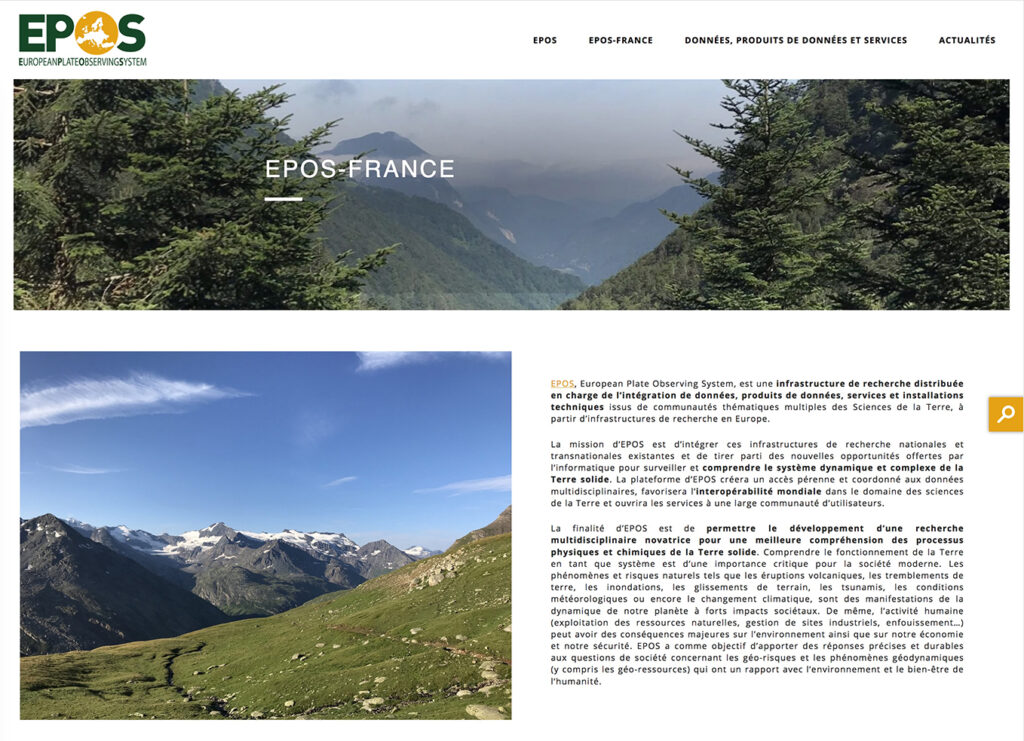 Home page of the Epos-France website launched on June 9, 2020 © Epos France – Go to the web site (french only at that day)

This is a synthesis of knowledge aimed at identifying known faults likely to produce earthquakes in the future. Indeed, identifying and characterising faults that have been active in recent geological times is a fundamental step in assessing seismic hazard. In the context of nuclear safety, this approach is notably recommended by guides such as the Fundamental Safety Rule (France) as well as those of the International Atomic Energy Agency (IAEA) or the US Nuclear Regulatory Agency (US NRC).

The BDFA is a cartographic representation of potentially active faults in metropolitan France, classified according to the age of the last observed movements. It is the result of a synthesis of bibliographical knowledge including geological maps, publications and scientific reports available in 2014. The field of investigation of the synthesis carried out was mainly focused on faults mapped over a surface length of more than 10 km, all or part of which are located within a radius of 50 km around basic nuclear facilities. This database is a snapshot of a state of knowledge at a given moment (2014); it is thus possible that earthquakes may occur in the future on faults not identified in the database. As an example, this was the case for the earthquake that occurred on 11 November 2019 in the commune of Le Teil on such a fault, named the Rouvière fault. However, it should be noted that this fault belongs to the Cévennes fault cluster, some segments of which are considered potentially active in the BDFA (Cévennes fault, Saint Montan fault and Marsanne fault).

The BDFA complements the NeoPal database (accessible via the GeoHazards site) of recent deformation indices and is intended to be extended to the entire metropolitan territory. Such work is currently being carried out within the Transverse Seismicity Action of Résif. The first results of the work carried out are currently being presented at a dedicated conference.

The development of this database, carried out at IRSN, was supported by the Ministry for Ecological and Solidarity Transition. 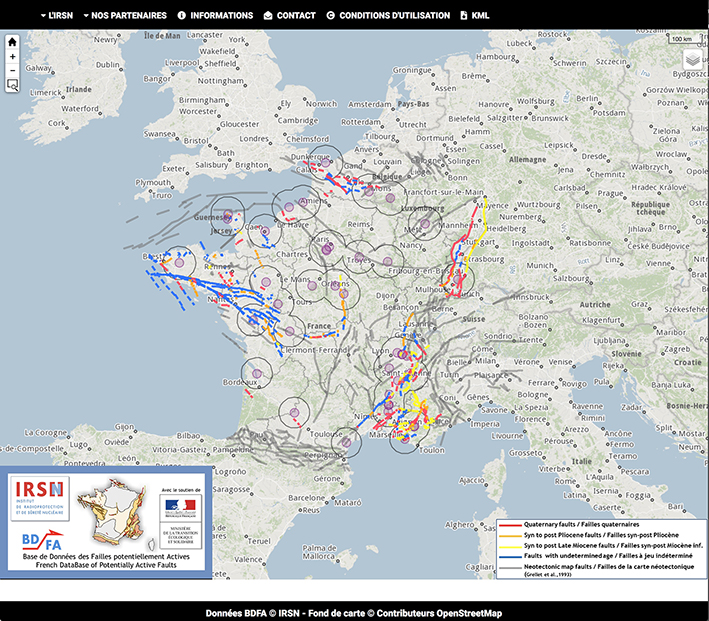 Knowing our seismic past is essential if we want to understand the magnitude and effects of earthquakes that may (re)occur in the territory. In order to complete instrumental data such as those currently acquired by Résif, which only provide information on France’s seismicity over a few decades, we need to turn to the disciplines of history (historical seismicity) and earth sciences (paleoseismicity).

As early as 1975, the Bureau de Recherches Géologiques et Minières (BRGM), Electricité de France (EDF) and the Institut de Radioprotection et de Sûreté Nucléaire (IRSN) relaunched a vast programme to characterise the historical seismicity of our country by researching and analysing evidence on earthquakes, kept in our archives (national, local or private). These testimonies form the basis of macro-seismicity, i.e. seismicity whose effects can be described.

The national macroseismicity database of historical and contemporary seismicity SisFrance

provides through its website essential data covering a period of more than a millennium. From 1921 to 2007, part of the data from the French Central Seismological Bureau (member of Résif) complements the data collected by the consortium. This database was offline for several years due to computer hacking, and will be accessible again in 2020 via a website that is currently being redesigned.