For more than 10 years now, a vast project called Résif-CLB (for “Construction large bande”) has been launched to develop the permanent metropolitan broadband seismic network (Résif-RLBP). The objective is to build a network of 190 stations distributed relatively homogeneously over the entire territory and capable of continuously recording seismic vibrations in a wide range of frequencies and amplitudes, thus advancing our knowledge of seismic hazard and the Earth’s deep structures.

Seismology is more accustomed to installing these “broadband” sensors in so-called closed sites (caves, tunnels, etc.), offering stable thermal environments that are generally far from the tumult of human activities. One of the particularities of Résif-CLB has been to develop an installation solution adapted to open environments, less dependent on geology or local infrastructures.

The last major drilling phase of the project was completed this year. Today, more than 80 boreholes have been drilled and Résif-RLBP is one of the first worldwide networks to adopt this type of installation in a generic manner. 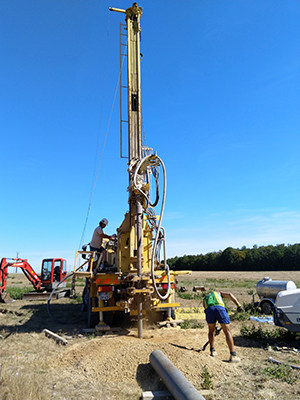