Alparray: three years of seismological measurements to understand the Alps

AlpArray is a consortium of research projects from about ten European countries that aims to specify the deep structures of the Alps (crust and upper mantle) to better understand the dynamics of the chain. AlpArray is based on the deployment of a dense and homogeneous seismological network 1 (mesh ~50 km) on land and at sea, over 11 countries. The 352 stations of the permanent broadband networks were complemented by 246 temporary land stations and 30 seismometers at the seabed. Deployed from the summer of 2015, the complete terrestrial network operated from mid-2017 to the end of 2019 and the seabed network for 8 months in 2017-2018.

AlpArray-FR is the French component of AlpArray, associating ISTerre in Grenoble, IPGS in Strasbourg and Geoazur in Nice. Funded by the French National Research Agency, this project has enabled the installation and maintenance of 63 temporary land-based stations from Alsace to Corsica and eight seismometers for the Mediterranean seabed. It also accelerated the installation of 17 permanent stations of Résif-RLBP, and eight temporary stations became permanent sites. Most of the temporary land-based stations were equipped with broadband instruments from the Résif-Sismob park, while the OBS Insu-IPGP park provided seven broadband instruments and Geoazur the eighth. 29 AlpArray seismometers were deployed in the Ligurian Sea and western Corsica in June 2017 by a Franco-German scientific team (ISTerre, IPGP, Geomar Kiel) on board the oceanographic vessel Pourquoi-Pas? After eight months of immersion in water depths from 1100 to 2800 m, the instruments were recovered in February 2018 from the German oceanographic vessel Maria S. Merian.

The data are currently being processed in all participating countries. To date, the main contribution of the French teams has been in the field of environmental noise tomography. The AlpArray-FR data have been integrated into earthquake localization by the BCSF-ReNaSS, contributing to a better knowledge of seismicity. Thirty stations were still operating at the time of the Teil earthquake (11/11/19), including one located 9 km from the epicenter. The recordings were made available to the community. 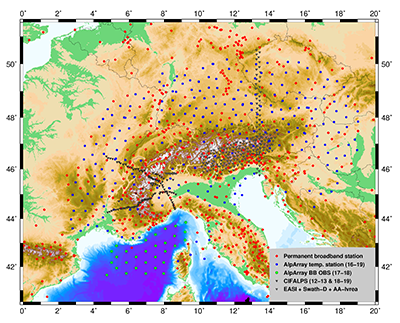 Map of the temporary and permanent stations installed in the Alps during the AlpArray project (see map legend) © Anne Paul, ISTerre. To know more about it. 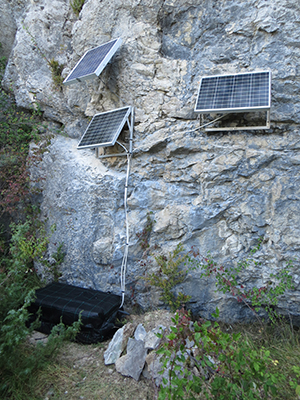 Temporary seismological station Z3.A178A installed in the commune of Lathuile (74) © Anne Paul, ISTerre. To know more about it.