Optical fiber is a fascinating concept that turns a silica thread the size of a hair into a light guide over very long distances, propagating information at the speed of light. This invention, which dates back to the 1960s, has revolutionized the way we communicate. For several years now, it has been revolutionizing the way we do seismology thanks to Distributed Acoustic Sensing (DAS). This instrumental approach derived from photonics allows us to convert the same fiber into a very dense network of deformation sensors.

Today, advances in photonics allow the DAS system to measure nanometric elongations of the fiber, every meter, over distances of several tens of kilometers and at frequencies exceeding the kilo-hertz. A fiber optic cable thus becomes a hyper-dense seismic network, with several tens of thousands of sensors, thanks to a single interrogator at the end of the fiber.

Beyond its measurement density and the use of existing fiber networks, the DAS has other qualities: the measurement is made from a single end, the acquisition system 2 can therefore be offset several tens of kilometers from the study area, which facilitates and secures the measurement. Fiber optics is a passive sensor withstanding high pressures and high temperatures, suitable for the study of the seabed or volcanoes, less prone to failures than traditional electro-mechanical sensors.

These advantages make DAS a promising solution for studying a large number of geological objects such as landslides, glaciers, geothermal fields, oceanic ripples…, and adapted to operational issues such as early warning of natural hazards, marine weather, road or sea traffic monitoring.

In France, the first work on DAS focused on seafloor fibers in France. Internationally, initiatives are emerging to federate research groups such as the NSF-funded DAS Research Coordination Network (RCN).

DAS is a technology that has already demonstrated its ability to overcome several constraints of traditional seismological instrumentation and should shed new light on a multitude of processes. Important work is underway within the international and national community to adapt the most widespread analytical methods to deformation measurements, to better control coupling effects or to manage large volumes of data. The nature of the recordings is already remarkable, but it can be assumed that the growing interest in this technology, as well as the continuous evolution of the market for telecom components, will lead to a significant improvement in the performance and cost of the technology in the years to come. 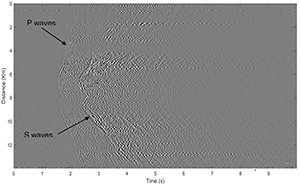 DAS recording of an ML=2.0 aftershock on November 23, 2019, following the M4.9 earthquake in Le Teil, France. The measurement campaign was carried out on a 14km section of optical fiber located in the immediate vicinity of the rupture zone. These measurements would not have been possible without the collaboration of the public network Ardèche Drôme Numérique, the operator ADTIM and the support of the company Febus Optics for the acquisition part © Anthony Sladen, Géoazur. To know more about it.