Installation of a new RLBP seismological station in the Var valley

The Risval project (Interreg, Alcotra 2014-2020) aims to acquire continuous seismological data in order to contribute to a better consideration of seismic hazard, but also to improve crisis management tools in the event of a major event.

Thanks to this project, a new seismological station has joined the Permanent Broadband Network (code: NIMR). It was installed at IMREDD, a recently constructed university building of the University Côte d’Azur in the lower Var valley, an area of the rapidly expanding territory of Nice. Cerema and Geoazur collaborated on the project. Two boreholes, 10 and 30 metres long, were drilled by Cerema in February 2017. The site was instrumented in October 2020 with two broadband sensors and an accelerometer by the two teams who will jointly monitor and maintain it.

This seismological equipment was able to record the Turkish-Greek earthquake that took place on 30 October 2020. This made it possible to orient the sensors in drilling and to check the reliability of the metadata of the new instruments. The data will be distributed through the Résif seismological portal.

Seismograms of the Turkish-Greek earthquake of 30 October 2020 (Mw=6.9), recorded by the various NIMR sensors.

The velocimetric signals in a frequency band (0.05-1Hz) from the 4 superimposed sensors. The signal produced by the Fortis accelerometer (in black) is plotted over it. Due to the very good superposition, the other signals are hardly visible (right : zoom on the P-wave for the vertical components ; left : zoom on the S-wave for the NS and EW components) © NIMR data, Anne Deschamps representation using SAC, Seismic Analysis Software, Goldstein, P., A. Snoke, (2005), “SAC Availability for the IRIS Community”, Incorporated Institutions for Seismology Data Management Center Electronic Newsletter

Seismograms of the Turkish-Greek earthquake of 30 October 2020 (Mw=6.9), recorded by the various NIMR sensors. 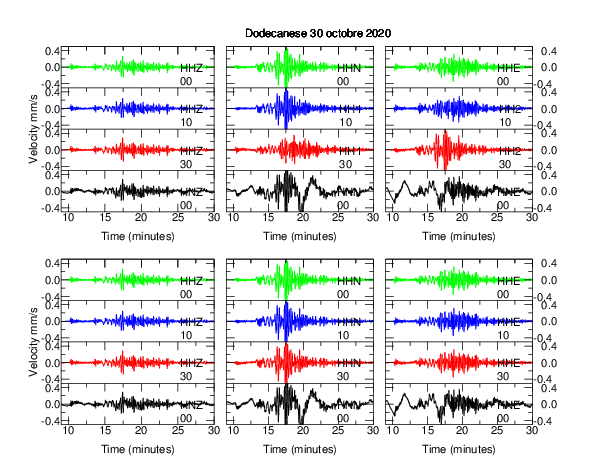