The Transverse Seismicity Action in the Seismological Research Letters Journal

For more than 10 years, the seismological, geodetic and gravimetric community has been structured within Résif. The main effort has first focused on the development of seismological networks and the information system. As time went by, the need to organize and develop work around seismicity in metropolitan France and overseas territories appeared. Thus was born the Transversal Seismicity Action of Résif (ATS-Résif), which federates the efforts and contributes to the visibility of the results.

The ATS-Résif is divided into six thematic axes. Four of them are presented in the article just published in Seismological Research Letters.

Axes 1 and 2 aim above all to produce a multi-origin bulletin and a reference catalog of French seismicity: they federate the work of the seven organizations in charge of the observation of the different territories concerned (see details). The bulletin will eventually integrate the locations of all the national and regional observatories. It will be continuously updated, disseminated via the FDSN international data center and referenced as a source of the European Eida archive on European seismicity. The quality and completeness of the future bulletin is crucial for hazard studies and seismicity statistics. One of the important challenges is to improve the discrimination between natural and anthropogenic events, the latter being detected in large numbers by the new and numerous Reactive instruments. The 3D velocity models currently under development will also allow to improve the localization and evaluation of the associated uncertainties, in particular on the depth of the events (important parameter for hazard studies).

Axis 3 of the ATS-Résif concerns the collection and analysis of historical and contemporary macroseismic data. Macro-seismic intensity reveals the severity of ground shaking, measured on the European EMS-98 scale and is based on non-instrumental data. It is the effects of the earthquakes that are observed and reported by witnesses of the events via forms, then analyzed taking into account the local geological and topographical parameters. Macro-seismic data are used for seismological and earthquake engineering, earthquake cost coverage, crisis management and social science studies. Axis 3 of the ATS-Résif works on the collection, analysis and dissemination of historical and recent macro-seismic information with the objectives, among others, of improving the quality of metadata for more efficient distribution systems, increasing the speed of dissemination in various formats and improving the traceability and reproducibility of intensity estimation methods.

The SRL article also presents axis 4 “implementation of intensity maps”. Beyond the known maximum intensity, the knowledge of the regional distribution of shaking and its mapping (shakemap) are essential. This mapping completes the instrumental information. If it is produced and disseminated rapidly, it contributes to crisis management as it is indispensable for estimating potential damage. The shakemap also makes it possible to compare the parameters and models used in hazard studies. The objective of Axis 4 of the ATS-Responsive is to generate a national earthquake map. The tool exists and is operational on the site www.franceseisme.fr. Its evolution towards the latest version of the USGS shakemaps program is in progress, as well as the integration of the Reunion and Mayotte regions to complete the current coverage. A better consideration of the regional context (site effects) is also planned.

The article ide Seismological Research Letters indicates that the four products described will soon be available on the new website franceseisme. This web site will eventually integrate all the information on seismicity for metropolitan France and the West Indies, Reunion and Mayotte. Most of the data will be disseminated in real time and freely accessible to the scientific community and the general public. These products are also resources for axis 6 of the ATS-Résif, relating to seismic hazard.

In the near future, the Transversal Seismicity Action of Résif will face the challenge represented by the exponential increase of data volumes (which is the subject of another article in SRL) and will continue its integration into the European EPOS services to which it has been contributing for several years. 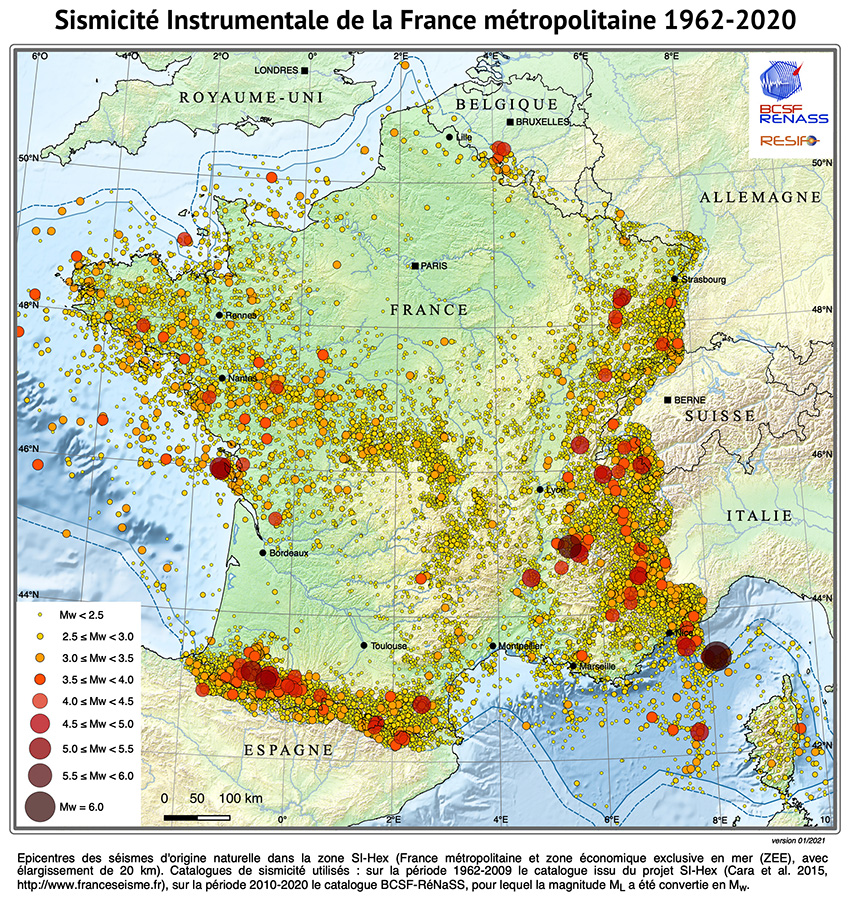 Instrumental seismicity of France 1962-2020. This map shows the epicentres of naturally occurring earthquakes in the zone (Metropolitan France and the Exclusive Economic Zone at Sea (EEZ), with a 20km enlargement), as well as earthquakes felt in France with an intensity EMS-98 ≥ IV (BCSF) © Sophie Lambotte, Eost 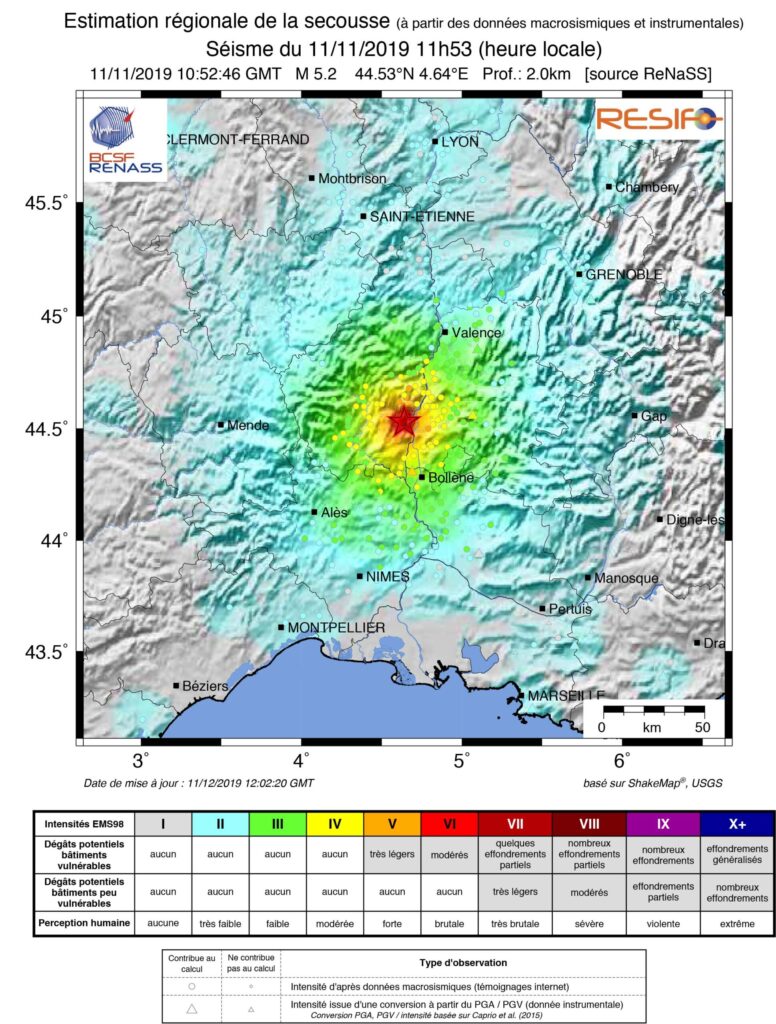 Shakemap of the Teil earthquake, November 11, 2019: regional estimation of the shaking from instrumental and macro-seismic data © BCSF-Rénass