Sisfrance is the reference database for consulting historical earthquakes in France

The French territory is far from the zones of strong deformations that represent the plate boundaries on a global scale. Considered as weak on a European scale, the seismicity is typical of intracontinental regions with a low rate of deformation, implying a long return period of major seismic events: one highly destructive earthquake and four earthquakes responsible for severe damage on average per century over a thousand years of history.
The ever-increasing population growth and economic development increase the degree of exposure of populations and property to natural hazards and in particular to seismic hazards, which unlike other natural phenomena cannot be predicted in the short term.

These observations led the French authorities to pay particular attention to the analysis of seismic risk when launching the French nuclear power program.

The appropriate knowledge of our seismic past combined with the other disciplines of earth sciences: geology, geophysics, geotechnics allows to better understand the magnitude and the effects of the earthquakes likely to occur (or reoccur) on the territory. As early as 1975, the Bureau de Recherches Géologiques et Minières (BRGM), Electricité de France (EDF) and the Institut de Radioprotection et de Sûreté Nucléaire (IRSN) started a vast program to characterize the historical seismicity of our country by researching and analyzing the testimonies on earthquakes, preserved in our literary heritage. These testimonies constitute the basis of the macroseismicity, that is to say the seismicity whose effects can be described.

The result of a work started more than forty years ago, the national macro-seismic database of historical and contemporary seismicity SisFrance is still updated permanently. Its objective is to guarantee the best state of knowledge of the macroseismicity of France. Under the impulse of the Ministry of Ecology and Sustainable Development, SisFrance is made available on the Internet since 2002.

Finally, it allows the user to contribute to the collection of historical data, do not hesitate to share your findings! 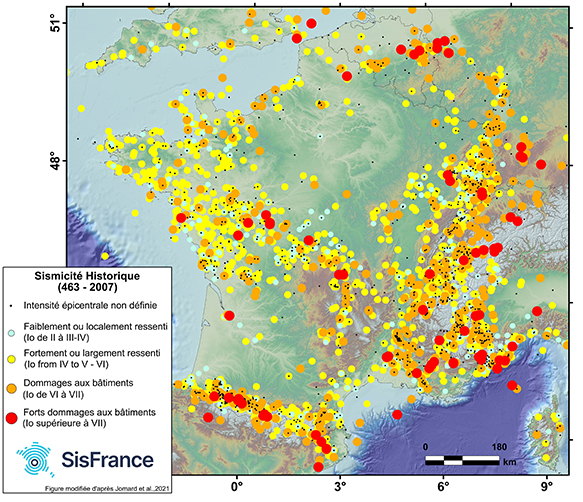 Historical seismicity of France from 463 to 2007 © Sisfrance