Within the axis “macroseismic data, historical and contemporary seismicity” of the Transverse Action Seismicity of Résif, focus are regularly made on historical earthquakes. They remind the interest to study these past events to understand the contemporary seismicity. The last two earthquakes in the spotlight are located at about 50 km on either side of the Rhine Graben: the Jura Souabe earthquake on November 16, 1911 and the Vosges earthquake on May 12, 1682.

110 years ago, on November 16th, a particularly destructive earthquake took place on the other side of the Rhine, about 50 km from the Franco-German border in the Jura Souabe The earthquake was felt in France as far as Paris and Grenoble. It was also felt in Italy, Switzerland, Luxembourg and Austria. The intensity at the epicenter is estimated at VIII-IX and seven German municipalities have an associated intensity of VIII, the municipality farthest from the epicenter is located about 30 km southwest of the epicenter.

A slightly less strong earthquake (epicentral intensity at the epicenter) occurred on the other side of the Rhine in France, about 50 km from the French-German border in the Vosges mountains in 1682. This earthquake was felt as far away as Grenoble, Paris, Orleans, Bourges in France, Nuremberg and Düsseldorf in Germany. It was also felt in Belgium and Switzerland. Three French communes have an associated intensity of VIII, the commune farthest from the epicenter being located about 10 km northeast of the epicenter given by SisFrance.

The intensity data for these two earthquakes are presented in the figure below.

Based on the average epicentral distance per intensity level, the decrease in intensity with distance seems similar for both earthquakes, especially for the first 300 km (on the right). Nevertheless, it is difficult to be certain that the two decays are similar in view of the difference in completeness of the intensity data for these two earthquakes.

These two major earthquakes occurred 50 km apart on either side of the Rhine Graben. Although the deformation processes that caused them could be different, these earthquakes appear to be relatively similar from a macroseismic point of view, despite the 230 years that separate them. 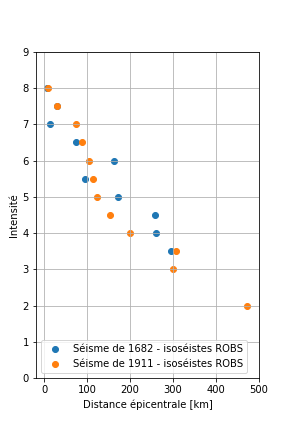