Comparison of the absolute gravimeters of the PIN PGrav

The absolute instruments perform the absolute measurements on the Reference Network (RésRéf) and are used to measure the scale factors and drift of the superconducting relative gravimeters. Four of these continuous monitoring gravimeters (GWR models iOSG and iGrav), measure gravity variations at Strasbourg, La Jasse, Trappes and Rustrel. This set of measurements constitutes a part of the activities of the Service National d’Observation (SNO) Gravimétrie.

The current comparison allows to check the agreement between the absolute instruments, the recent improvements of the AQGs and to measure the parameters of the iGrav gravimeter of the site. Since 2013, the latter has been monitored by the CAG, which is currently being upgraded to improve its performance. The comparison therefore also aims:

At the end of the week of comparison, following the departure of the FG5, the Micro-g Lacoste A10 free fall corner cube gravimeter shared between IRD, IPGP and IGN will also participate in the comparison during a session dedicated to evaluate the performance of continuous measurement of the AQGs. Then, the proper functioning of the IGN and SHOM A10 gravimeters will also be verified on site.

During the summer of 2022, one of the FG5 gravimeters participated in an international comparison in Sweden and, next year, we will participate to the key comparison organized under the terms of the working group on gravimetry of the Consultative Committee for Mass (CCM-WGG) of the International Conference on Weights and Measures (CIPM). These international and then national comparisons allow the measurements obtained with the instruments of the park to be traceable. The coherence of the products resulting from the different measurement campaigns is thus guaranteed.

RésRéf: the reference network is composed of 23 stations on which absolute gravity measurements are made repeatedly 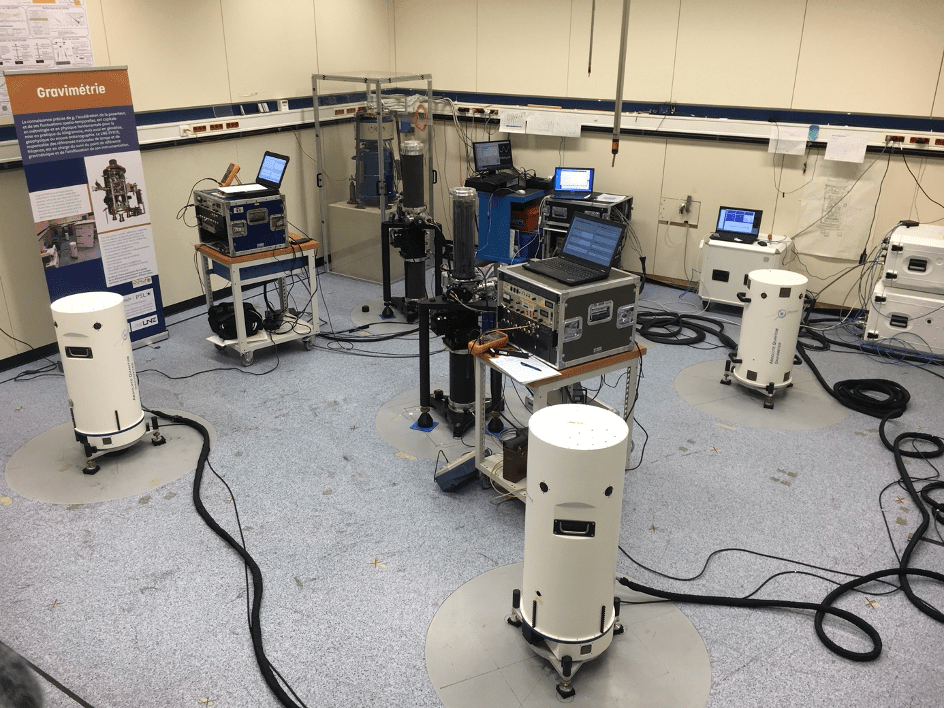 Comparison of the absolute gravimeters of the Parc National d’Instruments PGrav managed by the Specific Action Resif Gravimetry. In white, the AQGs, in black the FG5s, in the background the iGrav superconducting relative gravimeter of the continuous monitoring site. © Sébastien Merlet, Observatoire de Paris.