Gissmo can be used to describe (using photos, location and technical information, etc.) the RLBP and Rap measurement points operated by the observatories and to trace the various instruments that equip these stations. Gissmo also helps generate the metadata associated with measurement points (instrumental responses, date of operation and details of interventions).

The development of this tool was mainly carried out by the Eost teams in Strasbourg, in connection with the instrumental seismological platform. 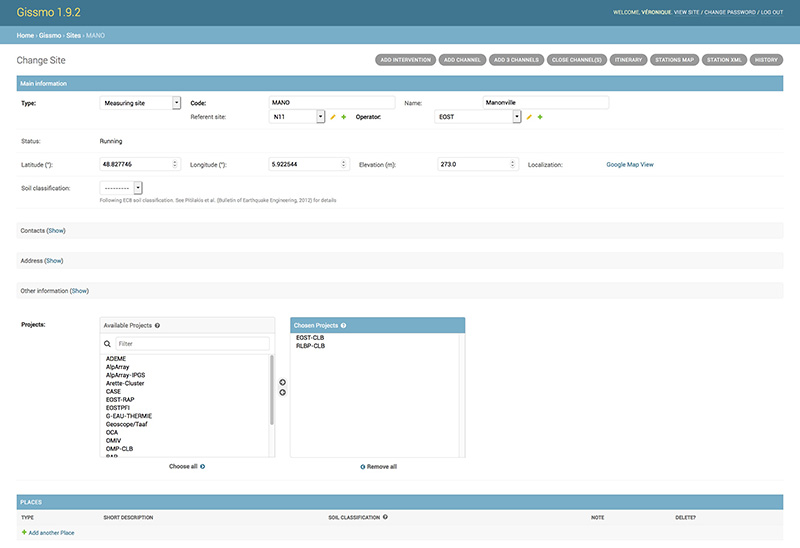 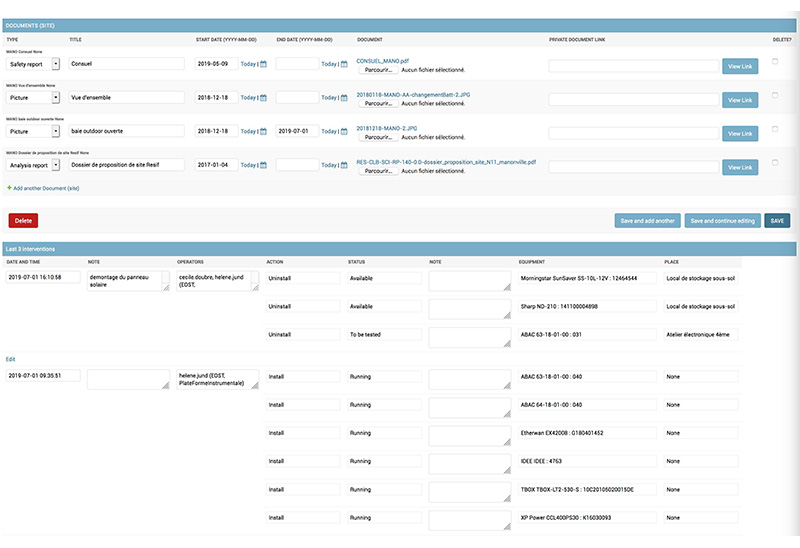 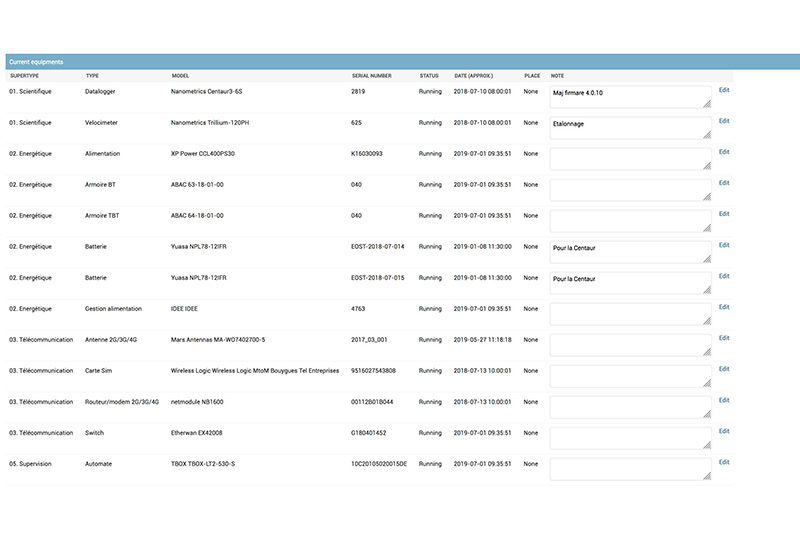 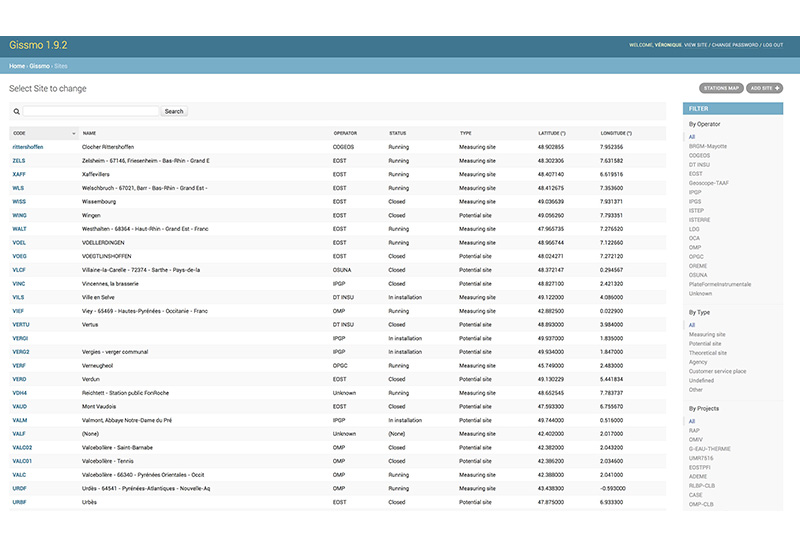 These tools were designed and are managed by teams from Eost in Strasbourg (in conjunction with the Gissmo software) and ISTerre in Grenoble. They are metrological tools that allow to check, test, calibrate and even repair various scientific and technical equipment usually installed at the stations: seismometers, digitizers, industrial PCs, supervision cabinets, cables… Based on different test benches and standardized procedures, these two platforms are adapted to manage large batches of instruments. They serve in particular as a national platform for RLBP (Résif-CLB project) and SisMob.

Synthetic series with an annual cycle of variable amplitude superimposed on a variable trend and noise (black dots) adjusted with a Kalman filter (red curve) and smoothed with a Vondrák filter (blue curve). Arbitrary units.

Synapse is a web interface that presents the status of the stations’ equipment according to values acquired and processed by the supervision engine. Both were implemented at the request of the operators involved to respond to their requirement for for a tool to enrich fault diagnostics, reduce the number of on-site interventions and increase efficiency. The status of the stations is represented in real-time by a color code and can be displayed in the form of a table, matrix and map. For each station, a page allows access to more details and to trace the variations of the values relative to its equipment or extracted from its data stream.

Synapse is completed by an optional email alert system.

The whole project was developed by the Geoazur Seismology Observatory / OCA, with integration of plugins written by OSUs members of Résif. 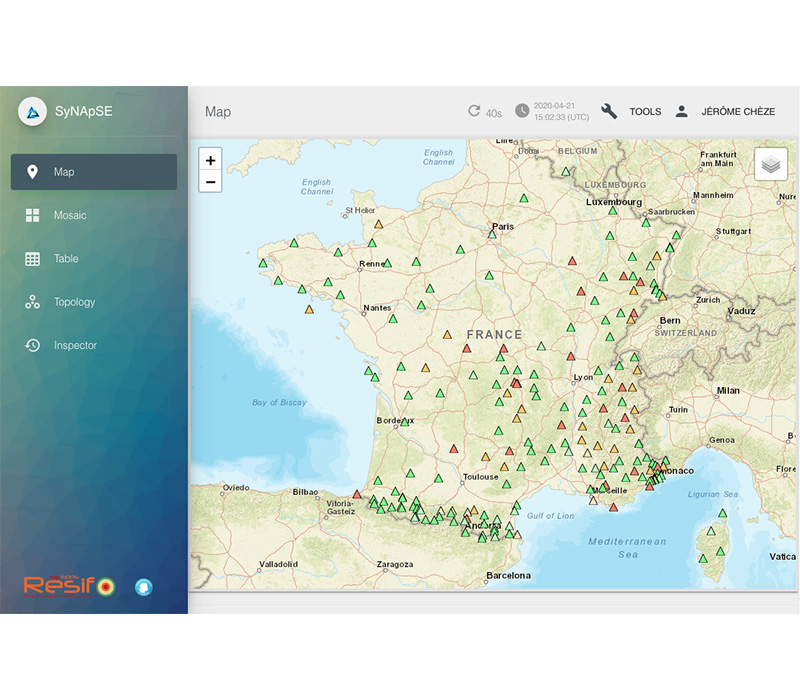 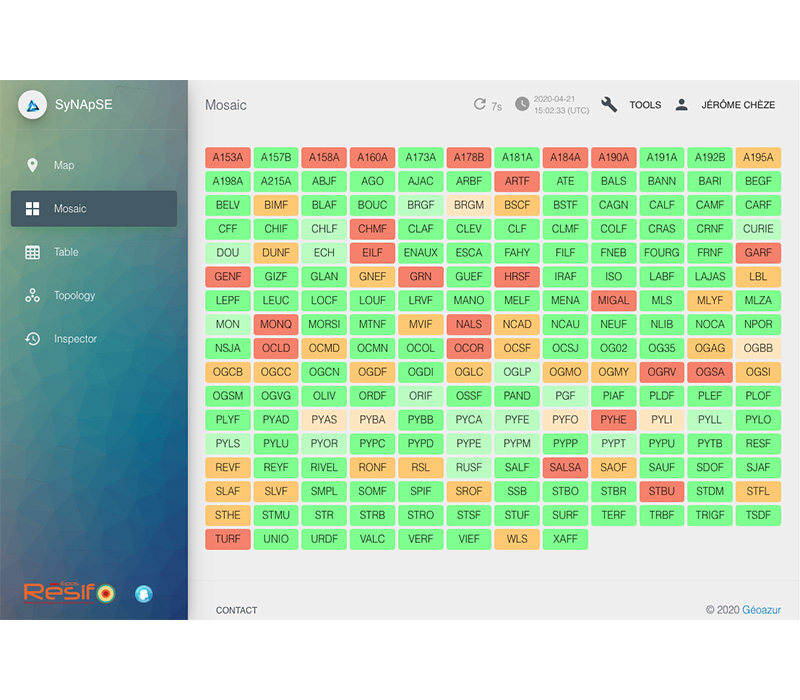 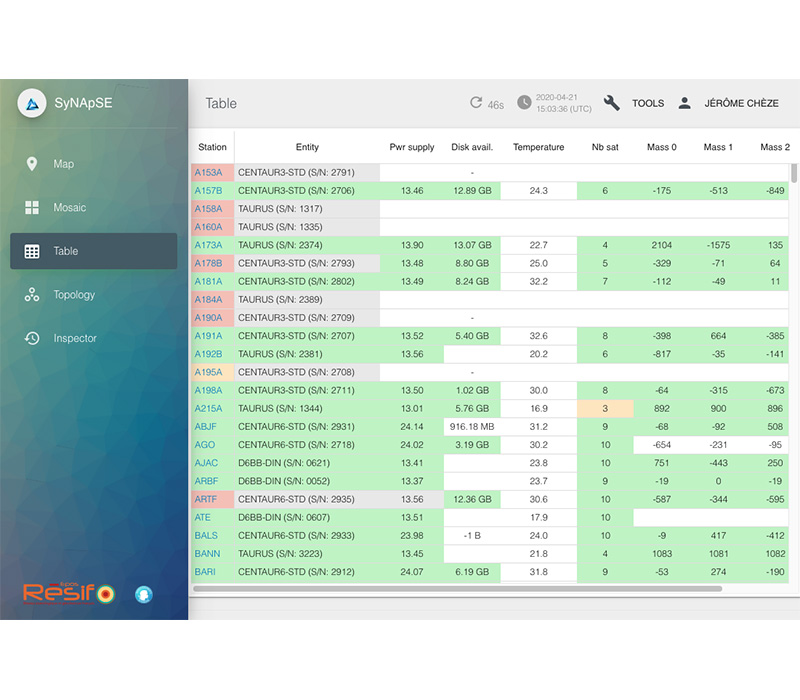 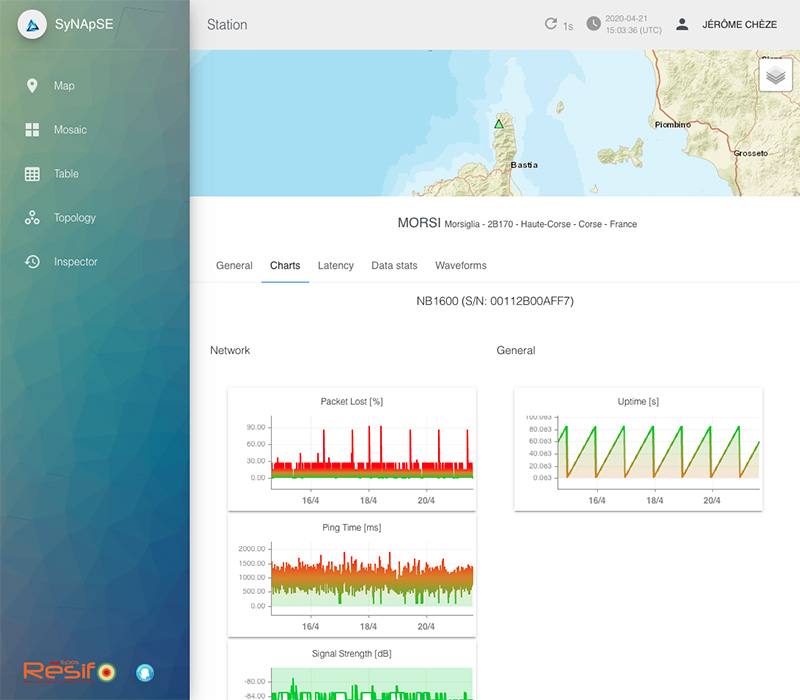 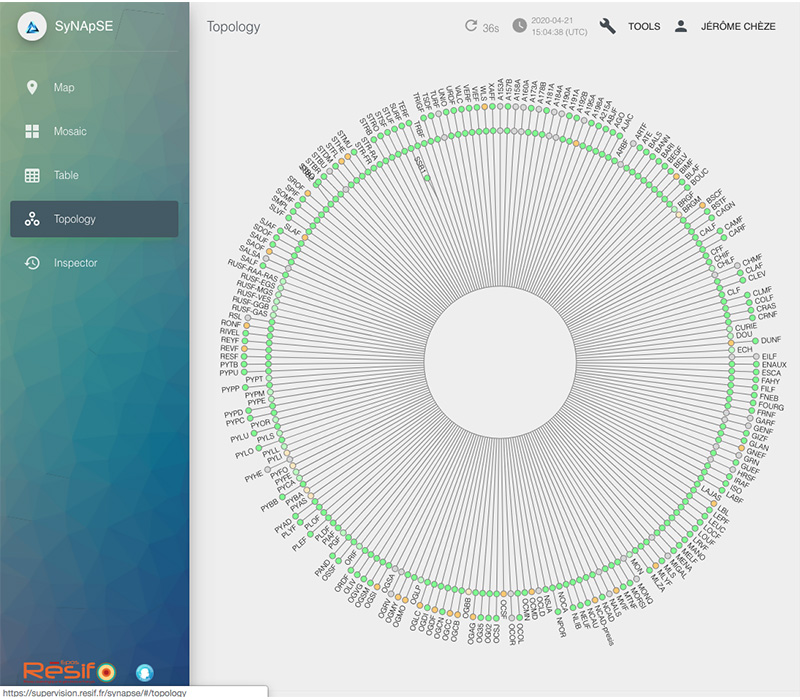 The SEED (Standard for Exchange of Earthquake Data) dataless standard allowed the multiplication and standardization of data and metadata exchanges for 30 years (particularly for metadata) but it has now been replaced by theXML station. This replacement was a decision by the FDSN (Federation of Digital Seismic Networks) of which Résif and Geoscope are members and has been progressively implemented by the world’s data centres, including Résif from its beginnings.
On December 1, 2019, the European Data Center Network EIDA also decided to close the last infrastructure allowing SEED data exchange – Arclink. However, while relatively simple tools are available for manipulating and creating metadata files in the SEED dataless format, there are none for the StationXML format.

There is a SEED -> stationXML converter, developed by IRIS (Integrated Research Institutions for Seismology), but it does not support some possibilities of the StationXML format (network citation DOI, station geology information). In addition, it makes it obligatory to continue producing SEED dataless as an intermediate step.

In 2018 IRIS created a first version of Yasmine (Yet Another Station Metadata INformation Editor,) a specific tool producing stationXML natively, The Resif information system has supported the development of a second version to add many features, including the support of atomic libraries of instruments maintained for many years within the A Resif nodes.