The French seismological and geodetic network Résif-Epos is a national facility cited in the national roadmap of research infrastructures published by the Ministry of Higher Education, Research and Innovation. Résif-Epos was launched in 2009 in an effort to develop, modernize, and centralize geophysical observation of the Earth’s interior.

The CNRS National Institute for Earth Sciences and Astronomy coordinates the Résif-Epos consortium which includes the majority of French universities and organizations involved in geoscience research. More than a hundred researchers, engineers and technicians work together on a daily basis thus making Résif-Epos a tremendous scientific tool available to the global Earth Sciences community.

This national research infrastructure is integrated into the European Epos infrastructure and actively involved in the continuing implementation and development of Epos. Moreover, components of Résif-Epos participate in centralized international networks and federations.

The scientific challenges posed by the exploitation of resources and the development of sustainable and competitive human activities require high-performance instruments to measure and observe the Earth, its movements, its wealth of  resources and its natural hazards.

Résif thus combines a very high density of measurement and a very high temporal resolution. This paves the way for new perspectives on the observation and knowledge of how the Earth functions, notably through studies of:

All of these studies will enable scientists to more accurately estimate natural, and particularly seismic hazards on French territory. 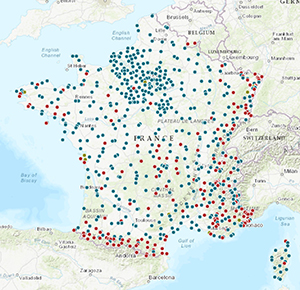 This efficient information system manages the ten terabytes of data collected annually. Raw data are analyzed, validated and then centralized for real time archiving and free distribution in accordance with open science policy. Every year, tens of millions of data requests are submitted to Résif by scientists from all over the world.

An ecosystem of research infrastructures around the Earth and Environment System

The consortium agreement signed in October 2011 between 18 major players in geophysical research in France has made Résif-Epos a national facility, included in the roadmap of research infrastructures published by the Ministry of Higher Education, Research and Innovation. This roadmap determines for several years the strategy of nearly one hundred international organizations, research infrastructures (RI) and projects, grouped by major fields.

Among them, the RIs of the Earth and Environment System contribute to the progress of knowledge on the processes at work within the major compartments of the planet, and between them. They are designed on a European or international scale. AllEnvi, the national research alliance for the environment, federates, programs and coordinates French environmental research to meet the major societal challenges of food, water, climate and territories.

The Earth System and Environment domain is divided into sub-domains: Logistical Infrastructures (such as the FOF fleet of ships), Internal Earth (to which Résif-Epos belongs), Atmosphere, Ocean and Coast, Continental Surfaces, and finally Biodiversity and Ecosystems, not to mention the virtual Earth observation infrastructures. These infrastructures each work in their own field, but the borders are porous and Résif interacts with others, for example in the framework of common multi-instrument sites.
To know more about Résif-Epos

Résif-Epos in the RIs ecosystem

Epos, the European Plate Observing System, is a research infrastructure which manages data integration in Earth Sciences, based on pre-existing services in Europe. The aim of Epos is to enable the development of innovative multidisciplinary research to attain a better understanding of the physical and chemical processes of the solid Earth.
Epos-France has deliberately committed to working in a context of open access to research data. A large part of its web site provides access to the data and services offered by Epos, and by French actors in the field. The web site and data are mainly intended for research professionals but are also open to the general public. Currently, the site only exists in French but an English version will be launched later this year.