Résif funded the development of the world’s first commercial quantum gravimeter. This compact and transportable gravimeter is commercialized by the start-up Muquans, founded in association with researchers from CNRS, the Institut d’optique Graduate School and Paris Observatory.

Quantum technologies are putting themselves to the test in the field: the Absolute Quantum Gravimeter (AQG) enables the acceleration of gravity to be measured with great precision and thus to evaluate changes in mass below the ground surface.

Until the advent of quantum technologies, the best method of absolute gravimetry was to measure by laser interferometry the acceleration experienced by a cube corner reflector in free fall in vacuum. The absolute quantum gravimeter is based on the principle of a free-fall measurement, but this time characterizing the fall of a cloud of atoms at very low temperatures. Rubidium atoms, trapped by lasers, are cooled to a temperature close to absolute zero. Left in free fall, their vertical acceleration is then measured by a matter-wave interferometry technique that exploits the quantum properties of matter, making it possible to evaluate the acceleration of gravity with an uncertainty 1 billion times smaller than the value of 9.80 m/s2.

The first results [1] obtained during joint experiments between Résif and Muquans open wide perspectives for scientific or industrial applications, in particular in the field of geophysics, for the study of the internal structure of the globe and natural resources, for reservoir monitoring or in metrology. 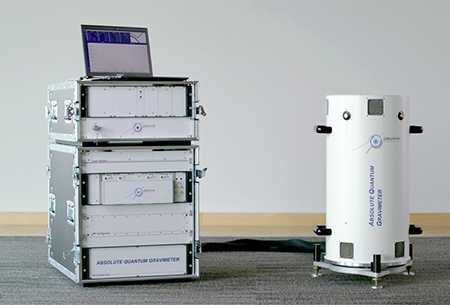